John Clarke was born on 1st February 1889 at Lemnagh Beg, Ballintoy, a son of Daniel and Margaret. He attended St. Mary’s Primary School at Ballinlea, but left, aged about 12 , to work on the family farm at Broughgammon, obtaining no further formal education.

Despite this, through extensive reading at Ballycastle Library, ongoing research and experimentation throughout his life, he became a recognised expert on the science of potato breeding, producing dozens of varieties, some of which are still widely grown.

John’s father, Daniel, was known to have tried to produce new potato varieties, but his son pursued this activity way beyond what he had achieved.  In 1923, Daniel and John Clarke had their potatoes certified by the Ministry of Agriculture’s Seed Classification system.

John specialised in the first early varieties, harvested in June and July. His first variety Ulster Monarch was certified in 1936.  Over the next 51 years he was to have 33 varieties certified, of which the first 30 had the prefix Ulster.

Thanks to John Clarke the most popular of potato varieties, Maris Piper was produced, a grandson of one of his varieties.  Dr. Harold Howard worked closely with John, travelling from Cambridge to Broughgammon to exchange views and potato varieties. The men  remained in contact with each other long after they had retired. 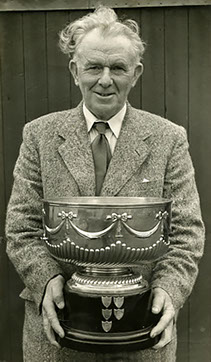 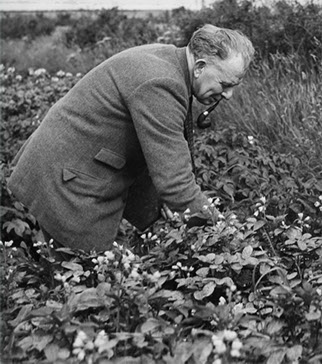 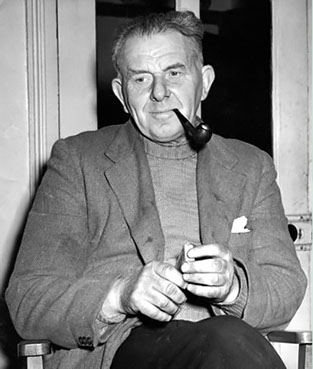 In 1947 John married Angela Hayes, a local schoolteacher, and the couple set up home  here at “Innisfree”.  The farmhouse was named “Innisfree” on account of Angela’s love of the poetry of W.B. Yeats.  Angela painted many of the potato varieties that John bred.

John was respected by his contemporaries, and by specialist scientists such as Dr. Redcliffe Nathan Salaman F.R.S. and Dr. Harold Howard. Dr Salaman was a leading expert on the potato, and lived near Cambridge, running a botanical research centre.

He researched and promoted resistance to viruses in potatoes, and set out to multiply virus-free stocks to supply outlets throughout the UK.  John worked closely with Salaman in this endeavour, setting up greenhouses in Broughgammon and at Innisfree.

John Clarke won many accolades. He was awarded the Lord Derby Gold Medal in 1948, a Master of  Agriculture Degree by Queens University  Belfast in 1950, the John Snell Medal by  the National Institute of  Agriculture Botany, Cambridge in the mid 1950s, and in 1957 the Belfast Telegraph Cup for Outstanding Achievements in Agriculture.   In 1969 he was  awarded the OBE. John died peacefully on 28th May, 1980.

In 1905 Dr. Redcliffe Nathan Salaman (1874-1955) started work on genetic resistance in potatoes at the School of Agriculture, at Cambridge University.  In 1920, he was appointed Chairman of the Potato Synonym Committee and later convinced the Ministry of Agriculture, in the United Kingdom, to fund a new Institute in Cambridge, to investigate viral diseases of potatoes.  He was appointed Director of the Potato Virus Research Institute and led the work in this field. He was elected to the Royal Society in 1935.

Dr Salaman rated John Clarke very highly as can be seen when he stated, in 1949 ...  “ In the last twenty years potato breeders have been increasingly ready to make use of the help which the scientist can put at his disposal; a lead was given by the veteran McKelvie and more recently his example has been emulated by John Clarke of Broughgammon, Ballycastle, County Antrim, the breeder of the ‘Ulster’ varieties, whose appreciation of the scientific approach is as outstanding as is his flair for selecting the most promising seedlings.

As well as leading researchers and breeders visiting him at Broughgammon, John communicated with plant breeders in Europe.  In April 2013 a Blue Plaque was placed on Innisfree Farm to mark the worl of this unsung  wizard of potato breeding. 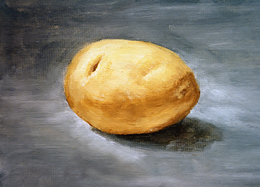 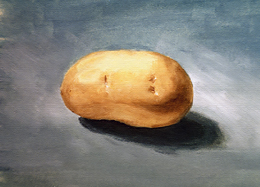 Two of John Clarke's varieties painted by his wife Angela