'There may be things better than beef stew and baked potatoes

and home-made bread - there may be.”      David Grayson: US Journalist

Antoine-Augustin Parmentier was born in 1737 at Montdidier in the Somme area of Picardy. He was the real  promoter of the potato as a nourishing food..

He served as a pharmacist in the French army during the seven year war , he was captured and imprisoned by the Prussians. During his captivity he was fed potatoes which at the time were only used for animal feed in France.

He survived on this diet  devising different ways of cooking the potato to bring  variety to the single food source.  The result of surviving well on the potato and also the culinary versatility of the vegetable  led him to become a potato pioneer, spokesman and promoter.

On returning to Paris in 1763 he continued his studies in food nutrition and health. He was so enthusiastic about the food value of the potato that in 1772 he proposed that it should be used  to nourish dysentry patients in hospital.

Although he won accolade for this there was still widespread scepticism regarding the potato, when he tried to use a garden at Invalides hospital to grow potatoes it was blocked by the land owners, as a result he lost his post at the hospital.

It must be remembered that the Faculty of Medicine in Paris had only declared the potato edible for humans in 1772. A law had  also been passed in 1748 which banned the cultivation of potatoes because they believed it caused leprosy and other ailments, this was still on the books during this time. 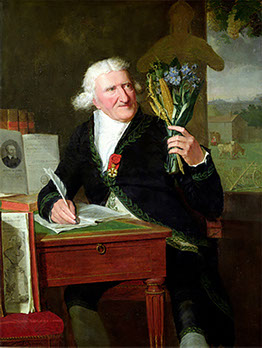 In face of this he set out on a campaign to promote the potato as a food by arranging well publicised events where he would prepare and cook potato dishes for key people in society who would in turn promote the humble potato, among his many guests and supporters were  Benjamin Franklin and Louis XVI who became convinced of the value of the humble potato and allocated ground at Nuilly to grow crops in 1787.

The potato was finally accepted during the first Paris Commune Seige in 1795 when the potato was grown as a food on a large scale and sustained the population during that time. During the reign of Napoleon Parmentier became the Inspector General of the Health Service. His contribution of nutrition and health was not only confined to the potato. He introduced mandatory smallpox vaccination, pioneered the extraction of sugar from  'sugar' beet, developed a school of bread making and experimented on the preservation of food, mushroom growing, wine making and mineral water.

He died in 1813 and today is remembered as the first promoter of the humble potato in Europe, his name lives on in many French potato dishes which carry his name such as: potage Parmentier, brandade de morue Parmentier, hachis Parmentier and Pommes Parmentier.